Prototyping with my Arduino Uno is great, but carrying it around in my bag is less than ideal! I wanted to design an enclosure to protect it from components breaking, as well as shorting out if it's placed on a metal table. I made sure to include slots for accessing the input/output pins. Still ironing out the kinks of the design, and might lower the vented portion to allow easier access to. Do you have the Colorized version that I see in the picture? When I download I seem to get the B&W version. I'm trying to print this on a color 3D printer. Or better yet, publish the color models and I can export from Eagle to Fusion 360 myself.

I have taken the dive into Eagle CAD for the sole purpose of modeling Arduino boards so that I can use them in Fusion 360 to accurately model enclosures and cases.

I have sold method to get the board out of Eagle CAD (looks really sharp in Fusion 360 - see the attached image !) but I notice there are a bunch of warnings/ cautions when doing so because there are no 3D models tied to the export board.

I have the Eagle CAD files from this website, and I can clearly see from within Eagle CAD the libraries used but do not have a clue where those are located or if they can be shared. (See the screen shot of the libraries)

I have been trolling the web attempting to get 3D models from online stores (as an example: digikey) as well as the generic (free) offering from library iO. I’ve even looked up data sheets to get dimensions and created the Step files from scratch in Fusion 360. (The ATMEGA chip, LEDS and resistors are all hand made. The image I attached took over 3 evenings to complete (like 10 hours) and is still not complete. :’(

Are the 3D libraries available (that are Arduino exclusive or come from Arduino directly) so that I can complete this task in a more efficiently and focus on my project? 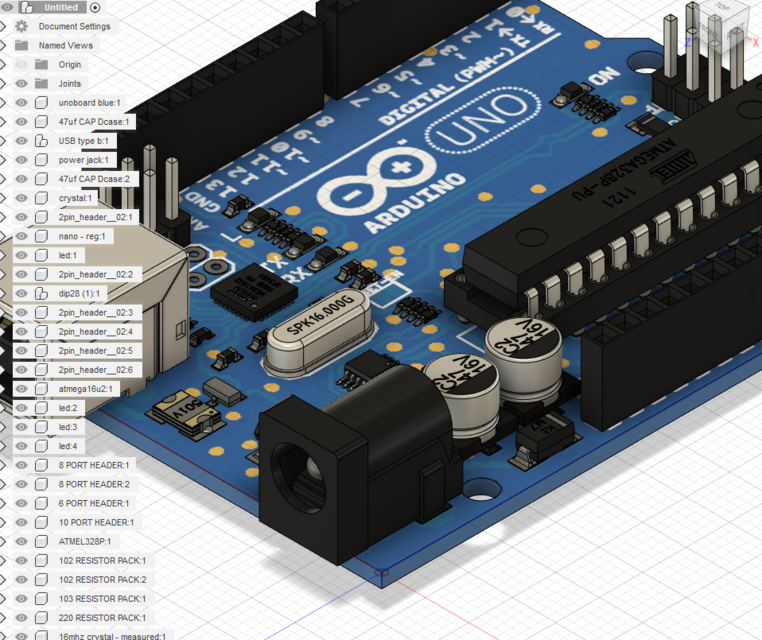